In The Footsteps Of Our Ancestors 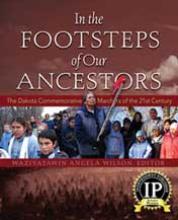 In the Footsteps of Our Ancestors is a collection of essays and photos that tell the story of the Dakota Death March of November 1862. In the aftermath of the U.S.-Dakota War of 1862, roughly 1,700 Dakota women, children, and elders were forcibly marched from the Lower Sioux Agency in southern Minnesota to a concentration camp at Fort Snelling. Those who survived this march and the subsequent hard winter were eventually removed from their homeland.

In 2002 and 2004, descendants of the original marchers, their relatives, and allies walked the route of the this death march to remember and honor their ancestors and the sacrifices they made. They will continue to walk every two years until 2012. Their stories of the original march, along with their experiences on the marches of this century, convey the deep pain and trauma of historical harms. They also point to the healing of these harms and the revitalization of the Dakota people.